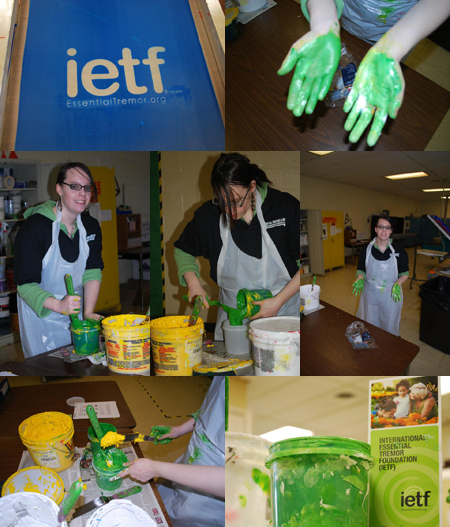 Melissa Masimore, a studentat the Trumbull Career and Technical Centerin Hubbard, Ohio was diagnosed with essential tremor (ET) less than a year ago. Because the condition typically causes shaking of the hands, Masimore’s diagnosis could have been a deterrent from pursuing her career.

“I was told that I wouldn’t be able to do graphic design,” she says. Despite having ET, she remained determined to focus on her vocation even though it is difficult to draw a straight line. She worries about her future, but is eager to move forward. “The tremor started with my hands and it has traveled to my head and legs. I feel as if I’m shaking from the inside all the time. I will not let ET control my life or my future career.”

When Masimore needed to complete a senior school project prior to graduation, she decided to screen print T-shirts with the IETF logo. Her motivations were personal growth and raising awareness of ET.

She says, “Through this fund raiser I wanted ET to become better recognized and known to the public and my fellow classmates. I wanted to send money I raised to the IETF because hardly anyone knows about ET. The IETF helps to get the word out there.”

She also learned more about others that have ET for her senior project and investigated the process involved with deep brain stimulation, a surgical treatment used for ET.

Masimore led the screen printing project with help from four assistants at the technical center.

“The senior project must be one that goes above and beyond something we already know. I started by contacting the IETF and was given the logo and the branding guide,” says Masimore. The shirts were donated by The Logan Company in Brookfield, Ohio. “Then I made my design and sent it back to the IETF for approval. Once approved, I sold the shirts up until the first week of April.”

Masimore and her team sold the shirts at school during lunch, going person-to-person at each table to ask if students would buy a shirt or donate money. They also posted flyers and made announcements about the shirts. She sold sixty shirts in less than three weeks and raised $460, exceeding her $300 fundraising goal. She donated the funds to the IETF.

The students wore the T-shirts on a designated day in April at school, helping to raise awareness of ET.

Masimore, who recently received a $500 scholarship from the IETF for the Fall 2012 academic year, has been accepted to Pittsburgh Technical Institute to study graphic design.