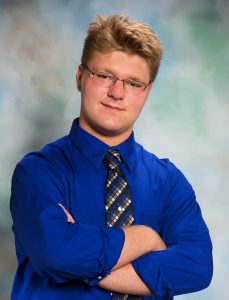 This is not our first time meeting Jack. He is an old friend of the IETF, having been featured in the IETF’s Fall/Winter 2010 issue of Tremor Talk magazine at the ripe old age of 12. We’ve been privileged to watch Jack grow up, as his mom always kept the Foundation up to date on how Jack was doing up in Redgranite, WI.

Jack has always been open about his tremor with friends and family, and he looks for opportunities to raise awareness about the condition. “One of my teachers, who also has ET, suggested we put an informational presentation together for the class,” Jack said.  “It was very well received.” His classmates and theater friends all know about his ET and are very accepting of both his abilities and his limitations.

And even though moving away in the fall to attend the University of Wisconsin-Stout (Wisconsin’s Polytechnic University) will mean starting over, Jack doesn’t see it as a problem. “I see my tremor as an opportunity,” he said, “an opportunity to inform other people about me and the millions of other people around the world who also have ET.”