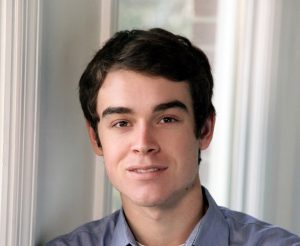 One winter day when school was called off due to poor weather conditions in Cincinnati, OH, Jackson decided to learn how to play Pink Floyd’s “Wish You Were Here”, including the intricate and complex guitar solo. He spent hours focusing on hitting the right cords with the right inflection. His trembling hands made this already difficult task even more challenging. In the song, Roger Waters expresses feelings of alienation and mistrust of those around him. This was something to which Jackson could definitely relate.

Jackson used to get terribly embarrassed when he was called to the whiteboard to write out the solution to a math problem, or when he was instructed to point out a specific location on the big wall map. It took a lot of introspection for Jackson to come to terms with his shaky hands. “I had to be humble,” remembered Jackson, “I had to realize that my friends and classmates were not there to persecute me, but to support me.” He made the choice to respond to their inquiries about his shaking hand in a more positive way; using humor as an ice breaker and a way to make new friends.

As he enters his freshman year at the University of Cincinnati, he will build on the determination and self-confidence he used to learn new songs and make new friends. The IETF is delighted to assist him on his journey.