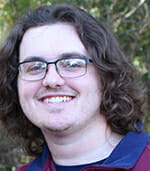 He was diagnosed with essential tremor at age 14 and said he doesn’t remember a time when his hands did not noticeably shake. He struggles to open packets, eat with a spoon, peel shrimp, button clothes, brush his teeth and insert his contacts. But he refuses to let his ET keep him from doing what he loves to do.

“I haven’t used my diagnosis as an excuse to quit or avoid certain tasks, but have chosen to work harder in order to succeed,” he said.

He decided to give back to his community while he was in high school by creating a “Little Pantry.” It’s a place where those in need can obtain food and household items without the stigma of being seen as helpless.

A student at Georgia Southern University, he is working toward a degree in health and human sciences. Once he obtains his undergraduate degree, Holder plans to continue his education to become a physician’s assistant.