The Music Goes On 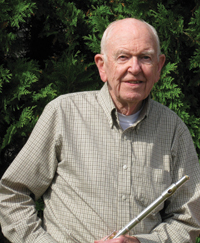 When William Congreve claimed that music “has charms to soothe the savage breast,” he described a phenomenon familiar to every mother whose lullabies quiet her crying baby. Listening to music can calm frazzled nerves, and create a comforting predictable rhythm that magically lifts spirits.

Playing music combines the benefits of hearing music with the challenges, frustrations and rewards of producing those sounds ourselves. The challenges and frustrations can be great for anyone, but for people with ET, they might be so great as to limit a person’s musical options or—in severe cases—even make playing a musical instrument, and reaping the rewards of performance, impossible.

This is the story of music in the life of my dad, Jack Jayne, 84, of Kaukauna, WI, and how he has triumphed over ET so that he can enjoy and reap the rewards of both hearing and playing music.

My father deeply understands the challenges of living with ET, because four years ago — after living with the effects of ET for approximately 25 years — he decided to learn how to play the flute. At that time, a New Horizons International Music Association band started in nearby Appleton, WI, under the auspices of the Lawrence University Academy of Music. My father and my mother, Doris, both 80-years-old at the time, joined. Although my mother picked up from playing the French horn in her high school days, my father — influenced by other flute players in the family including his sister, two daughters and two grandsons — started from scratch on the flute.

Music has been a part of my father’s life since he was very young. He says, “My interest in music must be attributed to my mother, who gave me piano lessons at an early age. Her love for opera and classical music was a strong influence on me. I played marimba in the high school band and sang in choirs and choruses over the years.”

Playing the flute requires finger dexterity, maintaining a reliable embouchure, or lip position, holding the instrument up against gravity to the side of the body at a proper height and angle, and channeling and controlling breath. Each of these requirements presents special challenges for people with ET.

A few years earlier, when taking lessons for a different musical instrument, ET posed problems to the extent that he stopped playing. My father explains, “About ten years ago, inspired by the book Piano Lessons by Noah Adams, I studied with a piano teacher for a year. Although I learned a great deal from the lessons, and had success in performing a solo in a recital, I felt that my tremor was a significant barrier to further progress, so I discontinued the lessons.”

With my assistance and with the assistance of technology, my father was able to overcome the challenges and frustrations of learning to play the flute. After observing my dad’s playing during a few lessons, it was decided that we needed to stabilize his right elbow and wrist, which greatly tremored. This was accomplished with two small accessories called a Thumbport and a Bo-pep.

These ingenious devices slip onto the barrel of the flute at the tip of the right thumb and at the base of the left index finger—places where many players have trouble maintaining a good hand position. Inexpensive, unobtrusive and used by flutists of all ages and abilities, these devices stabilized my dad’s hands so that he didn’t need to grip his flute so tightly to calm his tremor. His fingers were free to make music.

Next, we addressed his tone production, which was compromised by the instability of his air stream due to ET. Creating a tone on a flute is somewhat similar to creating a tone when blowing over the opening of a soda bottle. The player uses the small delicate muscles surrounding the mouth to direct an air stream of varying size, shape and speed over a small hole in the mouth piece of the flute. Any disturbance along the length of the flute, such as shaking fingers and hands, jars the flute, thus moving the mouth piece hole out of alignment with the air stream. To make things more difficult, the flute is held to the right of the player’s body, so uncontrolled movement of the right hand is magnified. The Thumbport and Bo-pep quieted the excessive motion of my father’s hands so that he could produce and sustain a good tone.

The process of overcoming the obstacles created by his tremor was slow, hard work, but eventually my father’s progress was such that we added a variety of music to his practice exercises. His greatest successes so far have been with music that is slow and expressive. Fast notes, especially those which use his right hand, are still difficult, but we had no trouble finding pieces he could play for studio recitals.

“Since I began playing the flute four years ago, guided by my daughter Nancy, I am learning to work around some of the physical limitations caused by ET,” says Jack. “The invaluable support and encouragement of my daughter has helped me persist in the learning experience. My wife deserves equal recognition. Self-motivation is much less effective than team-motivation when it comes to putting in practice time.”

When comparing his experiences of playing the flute with the piano, my father observed that “probably” the piano is a more difficult instrument to master for someone with ET than a flute or reed instrument, such as a clarinet or oboe, because the hands are not supported in any manner. Although one can grip a flute, there are no adaptive devices to assist in playing the piano.

As challenging as learning to play the flute despite ET has been, it has also presented non-musical challenges and rewards for my father. During the band rehearsals, because writing is slow and difficult for him, it was nearly impossible to write the conductor’s instructions quickly and legibly on his music. Asking another band member for help was not easy for him. He was accustomed to self-sufficiency. Nonetheless, my father took the uncomfortable step of asking a woman next to him for assistance and was surprised how delighted she was to help. When my father learned that her mother has Parkinson’s disease, he was able to share with her his knowledge about the distinction between ET and Parkinson’s-related tremor. Everyone came out ahead.

In 25 years my father has become knowledgeable about ET. Various medications were tried to treat his tremor, with minimal effect, but he learned how to accommodate his tremor as his family grew to include four children, thirteen grandchildren, and three great-grandchildren.

“As my tremor became more troublesome,” says Jack, “I switched from my dominant left hand to my right for eating. However, I was unsuccessful in doing the same for writing. Instead, I use my right hand to help guide my left and write very slowly. Needless to say, I use a typewriter or computer keyboard whenever possible. I have had to give up the use of common hand tools like a hammer and screwdriver, but I am fortunate to have an understanding wife, who grew up on a farm, and who has taken over those chores.”

When an ET support group was formed near his home, Jack became an active member of that group and of the IETF. “The principal help I received from the tremor support group was the realization that many others are confronted with problems like or worse than mine,” says Jack. “Yet, they have learned to accept their limitations and make appropriate adjustments in their mental attitudes.”

Twenty three years of retirement from his career as a paper chemist have given my father time to pursue a variety of other interests, including participation in Elderhostels and travel. He is also a docent, professional volunteer educator at a historical museum and at the county solid waste facility. He and Doris swim and exercise three days a week at the YMCA.

I would like to encourage others who, like my dad, are faced with ET or other physical challenges to put music making on their lists of possible pleasurable pursuits. As Johann Wolfgang von Goethe, 18th and 19th century German writer, so astutely advised, “One ought at least to hear a little melody every day.” And if one plays the melody as well as hears it, the tune is sweeter still.

About the Author
Besides being a flute teacher and accompanist, Nancy Schmalz is a retired high school music teacher. She and her husband, Peter, live in Oshkosh, WI, and have three children and three grandchildren.