A Lifetime of Gained Wisdom

Jim Fuess had ET his entire life. A strong supporter of the IETF, he passed away in 2012 at age 65. 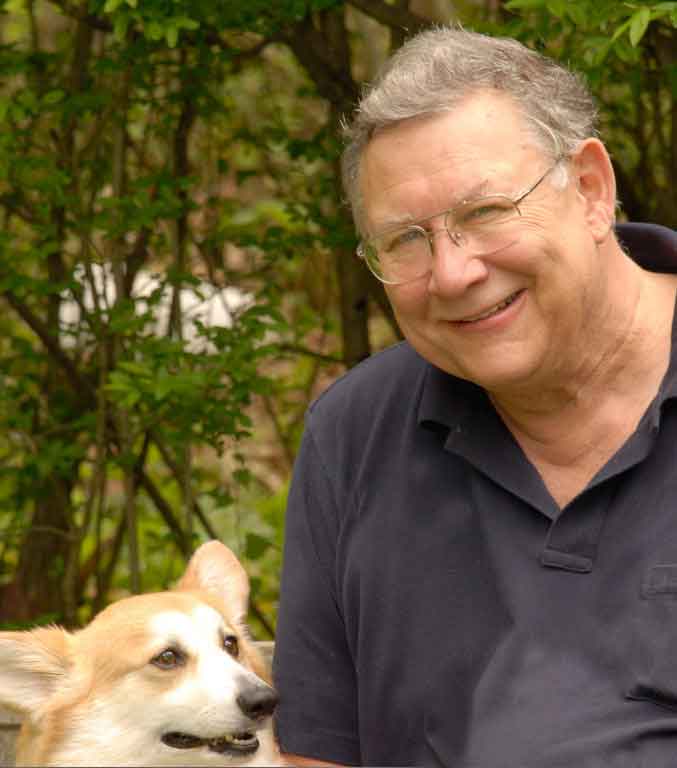 ET did not slow him down or limit his choices in life too much. Jim was a successful painter as well as chairperson and founder of the 14-year old New Art Group, a collective of New Jersey artists. (www.newartgroup.com)

Perhaps the willingness to succeed in an area typically not suited to a person with hand tremor comes from the early influence of a family member who also had ET.

“My grandfather had ET,” said Jim. “He was the headmaster of Andover, a noted historian and biographer, a writer and educator, and a public speaker. He also loved vichyssoise and good tea in fine china cups.”

Jim, whose father was a United States Foreign Service officer, was not always quite as acclimated to his ET as he was before his death. As a teenager, he was misdiagnosed and prescribed L Dopa. He stopped taking it because it made him “weird,” and it didn’t help his tremor. Jim carried an electric typewriter around for writing tests in classes much like people carry laptop computers today. The typewriter, however, was much bulkier and heavier. 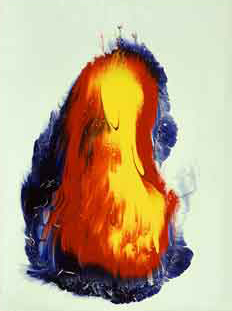 Although Jim was high school class president, his early experiences proved that teenagers can be cruel. But he also said that he learned quickly that standing up for yourself can make a difference in how others perceive you when you have tremor.

Although Jim studied Medieval and Renaissance art when his father was stationed in Rome, he said it never occurred to him that he could become an artist with his tremor. “I was going to be a writer and an academic. When I was 30, a lady friend who was going back to Zurich gave me her paints and canvas and said, ‘Play.'”

“Not having gone to art school and having no preconceived ideas of what to do,” Jim said, “I was able to devise a way of painting acrylics on canvas using various thicknesses of liquid paint in plastic squeeze bottles.”

By this time Jim knew he wanted to paint, and he adapted a style to suit his individuality. “I love being creative. When my work is going well, it is one of the great joys of my life.” As is the situation for most people with ET, Jim’s tremor, which he experiences with his head as well as his hand, has worsened over the years. According to Jim, he has tried three different medications and three different neurologists so far.

“Doctor issues” is a common complaint among people with ET. Jim suggested, “If you don’t like your doctor, then find another.” 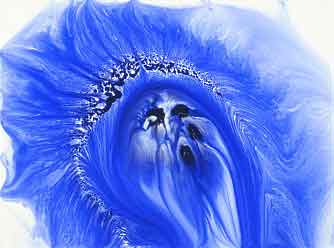 But Jim was quick to point out that the situation of working with physicians and other medical personnel has improved greatly during the past 40 to 50 years. “There is greater understanding as well as more compassion, help and information. The IETF is doing a wonderful job. The more information that is out there, the better off we all are. The IETF deserves our support.”

On the subject of coping or adjusting to life with ET, Jim believed “there is a great difference between those of us who have grown up with ET and those who have encountered it later in life. Those who have had it a long time have adapted and learned all sorts of tricks. My heart really goes out to the people who have gotten it later in life and have had to change professions and have to support their families.”

With this in mind, Jim offered some coping tips—suggestions for adapting to life with ET. When creating a signature, make it as simple as possible, he explained. The only rule is that it must match the signature on the back of your credit card or the signature on your bank card.

Additional bits of ET wisdom include, “Ninety-nine out of 100 people will help you fill out a form. Most people are too self-absorbed to notice your tremor. Keep your sense of humor. Don’t go to a wine-tasting at a biker bar. Don’t mix nitroglycerine in your basement.”

Obviously keeping a sense of humor was an important key to Jim’s coping style, but perhaps his most important bit of advice is about the company you keep. “I couldn’t have done all this without the love, support, patience and understanding of my wife Claudia,” Jim said.

Then there was the company of Theodore the Magnificent II, also known as Teddy 2, the couple’s Pembroke Corgi who combined a love of eating with assisting Jim with tremor mishaps. “If I spill something, he is overjoyed,” Jim said with a laugh.