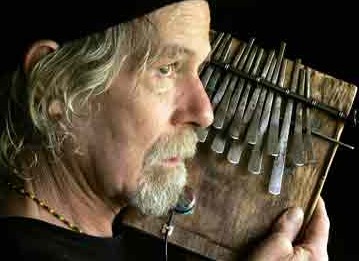 Oregon-based musician Richard Crandell had little reason to question his abilities as a guitarist. He had played the steel-string guitar since the 1970s, and he recorded six albums of original compositions. However, he grew more uncertain of his skills beginning in 2000.

Complex musical passages he had glided through a year earlier suddenly became difficult, if not impossible, to play. As hard as he tried to control it, his hand shook. He believed and hoped that he was simply out of practice. Richard practiced, practiced and practiced.

At about this same time, an opportunity presented itself for Richard to drive a tour bus for Afropop star Thomas Mapfumo and his band. Never having driven a bus before, Richard accepted. He grabbed his guitar to play along with the band during down time, and he headed for Alabama.

When not driving the bus, Richard continued to struggle to return to the level of performance that he expected. But it became apparent that no amount of practice was going to help, and soon Richard found himself picking up his guitar only occasionally.

“I was very frustrated at this time because I had a lot of music that I had composed that I wanted to get out,” says Richard. “I kept telling myself that I would get back to the guitar eventually.”

Richard says he has no answers about the role of fate or destiny in his life, and he is not religious. But he admits that he has always left himself open to the meandering currents of the universe. After returning home to Eugene from the first tour, Richard was inspecting the empty bus when he looked under a seat and found what the currents had swept in and left behind for him.

“I saw this little mbira, a flat wooden instrument with metal strips across the top, so I picked it up and tried to tune it, but it didn’t make sense, so I took it home and set it aside,” says Richard.

Often, gifts left by the currents need a bit of cleaning-up and fiddling-with before they make sense. On the next road trip to Texas, Richard took along the mbira, an ancient sacred instrument of Zimbabwe, and asked Zimbabwean Ngoni Makombe, a master mbira player and member of the group, to show him how to tune it.

“I started playing it and liked the sound. I picked out a song and then started trying out combinations of notes,” says Richard. “There is a little hole that I put my right pinky finger into, and I hold the sides of the instrument in my hands. I play the keys with my thumbs, and I pull keys with my right index finger.”

In 2003, he was diagnosed with ET, but by this time his problems playing the guitar were overcome by his new found obsession with the mbira.

“This instrument changed my life. It’s become a part of me. Because of the limited range of notes, I write different styles of music, whatever will work including Celtic jigs and some jazz. I even wrote a piece for Miles Davis,” says Richard.

Because the mbira is so compact and lightweight, Richard carries it with him wherever he goes, including to his doctor’s office, where he “noodles” on it while in the waiting room.

In 2003, long-time friend, composer and producer John Zorn, came to Eugene and Richard gave him a tape of his mbira music. According to Richard, Zorn loved his “mbira stuff,” and he asked him to make a CD for his record label that has a reputation of offering innovative sounds in music.

Zorn paired Richard with Brazillian-born percussionist Cyro Baptista and together they have made two mbira CDs: Mbira Magic and Spring Steel. Mbira Magic made the Washington Post’s list of the top ten albums of 2004, the first time any of Richard’s CDs had received such critical acclaim.

Richard, who shares his birthday with Eric Clapton, Celine Dion, Norah Jones, and Vincent Van Gogh, turned 66 on March 30, 2009. He finds the attention that his music is receiving to be amazing and uplifting, but he says that the attention is not the most important goal of his art.

“What I really want to do is calm the world, or at least my little part of it,” says Richard. “And I love to teach. I wish I could clone my mbira and take them with me wherever I go to give to people. I would teach them to play, and we could sit in a circle and play calming music that is beautiful. We’d forget about what we are doing and about what is happening in the world.”

Although he had no cloned mbiras to give away, Richard took a step toward his goal of calming the world when he recently visited with the ET support group in Eugene, led by Nick Richmond and Dr. Ron Wolfe.

“I took my mbira, and there was this man who said he couldn’t play music. I showed him how it worked and I think he could have gone on playing for years,” says Richard.

According to Ron, Richard is “a really nice, quiet, gentle, smooth sort of guy. He can walk into a room without his instrument and calm everyone in the room with his style. The mbira fits him perfectly, because it is smooth, calm and it has a tremor of its own.”

Long-time friend and fellow musician Mark Schneider has his own take on Richard. “Richard’s a spiritual guy. Part of being an artist on the lower level is the need to keep yourself open to opportunities as they present themselves. You avail yourself to the mystery and remain open to things as they happen,” says Mark. “This is what Richard does. This is why he found the mbira, or the mbira found him.”

“Unseen hand, mystery, coincidence, luck. It just seems to me that when I take a step in the right direction, good things happen,” says Richard.

One day last fall, after reading a syndicated medical column on ET by Dr. Paul Donohue, Richard took the step of contacting the IETF. After a long conversation with IETF Executive Director Catherine Rice, Richard decided that he wanted to record another CD of mbira music and donate part of the proceeds from its sale to benefit individuals with ET.

Richard has three goals for this project: raising funds for awareness and research, helping people with ET to be calmer, and showing people with ET that they can still accomplish things in life despite having ET. “The world needs calming whether you have ET or not,” Richard says.

Visit Richard’s website at www.richardcrandell.com and purchase a copy of Richard’s CD Essential Tremor, and a portion of your payment will help fund the IETF’s research and awareness initiatives.