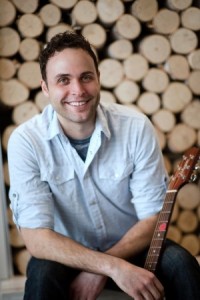 Not all coping skills are positive. Sometimes, in our effort to minimize stress and/or conflict, we employ strategies that actually make things worse. Those affected by essential tremor have options when it comes to their tremor: They can either choose to be open about their shaking or attempt to hide it. Brett Wiscons spent many years hiding his essential tremor. As a musician and author, he felt it was just too hard, too embarrassing, too not-normal, to reveal. But what he didn’t expect was that hiding who he really was would add so much unnecessary fear and anxiety to his life. Just recently he began to talk openly about his ET.

I first remember my tremor rearing its ugly head back in high school. Fitting in at that age was hard enough, but having shaky hands made it so much worse. I remember sitting in the cafeteria with my friends trying to remove the tightly-wrapped foil from around a baked potato. I tried to peel back the foil quickly so that no one would notice my struggles, but my hand shook so violently that little silver bits were propelled across the table. Some of my friends laughed and poked fun as the bits flew by. They chuckled and I even joked about it with them. But for me, on the inside, it wasn’t funny at all.

Because my parents didn’t make a lot of money, I was already dealing with the shame of receiving free school lunches and the looks associated with that. So this tremor was just one more thing that made me feel different from everyone else when all I wanted was to just be normal.

Growing up in Indiana, I dreamed of being a professional musician. I would escape to my room, turn on some Hootie & the Blowfish, close my eyes and dream about singing “Only Wanna Be with You” to a packed arena filled with gobs of adoring fans. I wasn’t sure exactly how to get there, but I knew I wanted that job.

But it was hard. I was so self-conscience about my shaky hand that I made it a point to try to keep my essential tremor hidden from the rest of the world. And for a while, it seemed to work. I made it through high school and college without my tremor really getting in my way too much. I played sports, dated girls, and otherwise lived my “normal” life.

When it did get in the way though, it was terrible. I tried to teach myself how to play guitar, but my tremor made it seem impossible. My left hand and thumb refused to glide naturally across the fret board like Mark Bryan (lead guitarist for Hootie). I lacked his grace and effortless motion. I got antsy, impatient and frustrated. I just didn’t know how to deal with it.

That could be why I decided to try my luck as a lead singer instead of a lead guitarist. Although I would be front and center, my hands wouldn’t. I sang with a few bands and even managed to play a little guitar here and there. It was nice to have a band behind me. Knowing I was not alone helped me focus and keep my tremor in check. Over the years, with practice and repetition, playing in front of audiences has gotten much easier. I am not as focused on my tremor and whether people are noticing it. But there is still that little bit of anxiety for some of my bigger performances, and of course, the tremor is always there. I know it always will be.

In December 2013, I was asked to sing the national anthem prior to an NBA basketball game in front of 20,000 people. To be honest, if they said I had to accompany myself on guitar, I would have turned it down. I was worried that the sheer magnitude of the performance would exacerbate my tremor so badly that I wouldn’t be able to play at all. So I did what so many of us do; I found a work-around. I suggested that I sing it a cappella and (thankfully) they agreed. The audience loved it! That was a real turning point.

Over the years, I think I’ve done a pretty good job of hiding my tremor. I used to think that was a good thing, something to be proud of. However, as I begin to play more and more solo acoustic shows, I have become more accepting of my tremor. When it’s just me and my guitar under the spotlight I can’t conceal my hands under a table or bury them in my pockets.

I know how tough it can be to use a soup spoon or button a shirt. I struggle with these seemingly easy, day-to-day tasks too. But I think it shows your true character to keep soldiering on and finding a way, day after day, to keep rising above the challenges.

I want to be an inspiration to others. My career is slowly building. I’ve released a new album, which was produced by a two-time Grammy Award winner, debuted a new music video, and even published my second private detective novel. And while I don’t expect to be famous around the globe, I have started to gain fans across the U.S. I want to use this public platform to help raise awareness and find a cure for this life-altering condition. As my career grows, I know I can make a difference. Maybe I can help reach the next generation and be an example that anything can be done if you set your mind to it, even having a career in the entertainment and music industry, even with essential tremor.

I have learned several things that help keep my tremor under control. I do yoga regularly to help strengthen my core and help my overall flexibility. It also helps me relax and relieves a lot of my day-to-day stress. I eat small meals more frequently and get plenty of sleep (when I don’t have a late night gig). I avoid anything with caffeine, as it seems to make my tremor worse. I also take a beta-blocker when I need a little extra help.

It has taken me a while to get to the place I am now, in my career and in life. I realize now that most people never get the opportunity to do what they love for any amount of time. I consider myself to be very lucky that I have been able to do this for so long,. And although I worry about what the future may bring, I don’t let negative thoughts consume me. I know that someday I may have to hang up my guitar and put down the mic for good, but that day is not now. Now is the time to enjoy the ride. And enjoy it I will!

Essential tremor is just something I have. It is my new normal. I know that now. If you feel beaten down or worry that you can’t achieve your dreams, I hope you’ll look at my story for inspiration. Having ET doesn’t have to define you. There is no shame in having it. I encourage you to follow your dreams. Tell yourself you can and then get out there and do it. And keep doing it, trying, over and over until it happens for you. Grab that air guitar and follow your dreams, no matter if you’re eight or 80. Make it YOUR new normal.

Since the writing of this story in 2015, Brett’s music career has taken off. Here are some of his accomplishments to date: