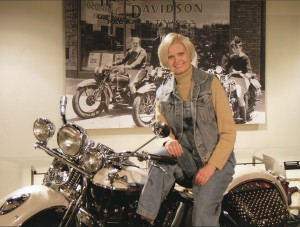 Three years later, after building and testing their early engine and frame models, the friends built a 40’x60’ shop on Milwaukee’s Chestnut Avenue. In fact, that original site still remains the location of the corporate headquarters of one of the best known and most iconic motorcycle manufacturers in the world today: Harley-Davidson.

Her grandfather was not only one of the four founders of Harley-Davidson, but also the first president. Her father, Gordon Davidson, was company vice president. And for some time, Jean and her husband owned and operated the largest Harley-Davidson dealership in Wisconsin. She had a close relationship with the Harley family, was introduced to many famous motorcycle racers, several infamous Hell’s Angels, and even the daredevil Evel Knievel.

Although her adventures would leave most of us breathless, there was more that Jean wanted to do other than feel the wind in her hair and the rumble of a throaty engine. Jean wanted to teach.

So she moved away from the hustle and bustle of the family business to a small, quiet town, to fulfill her dream. She started teaching high school Social Studies and English and then taught classes in junior high. It was glorious being an educator. It was a fun and rewarding career choice, and it filled her heart knowing she was making a real difference in the lives of so many children. She received specialized training in order to teach dyslexic children and adults and eventually started her own learning center in conjunction with Nicolet College, in Eagle River, Wisconsin.

And things went on that way, the way things usually do: one day rolled into another and the years drifted by. Before she knew it, she had raised five wonderful children and educated countless more. They were the joy of her life, all of them. But as she approached 50, things began to change.

“It was a really stressful time for me,” she explains. “I was living in a little town, teaching for a private boarding school and a college. Most of my children were grown and I was thinking about getting divorced. I remember very clearly, I was driving along and I glanced in the rear-view mirror. That’s the first time I noticed it. My head was shaking.”

For some time, she tried to ignore it. She made excuses for it, believing in her heart that if she tried hard enough she could control it—she could will it to stop. But her hands and her head continued to shake, despite her best efforts. “The more I tried to make them be still, the worse they seemed to get.”

Her friends began to notice her hands trembling and her head bobbing. Jean tried to laugh it off, but dear friends can be very persistent. They feared, as most do, that Jean was developing Parkinson’s disease. Jean hoped that wasn’t the case. She knew that her mother had also had shaky hands, but didn’t have Parkinson’s disease. She finally went to a doctor to find out exactly what was happening to her body.

“Have you ever seen On Golden Pond?” her doctor asked her. Of course she had. Who hadn’t? Katharine Hepburn and Henry Fonda had both just won Oscars for their performance in that film. “Well,” he paused, “you’re going to look just like Katharine Hepburn.” He wiggled his body, shaking his hands as if she didn’t know what a shaking hand looked like. It took everything she had to stay calm. She wondered what exactly he meant by all this. What was this thing she had? How bad would it become? Would she get as bad as her mother? The idea of a shaking voice and head and hands was unnerving, at best.

It took time to get answers, but eventually they came. She educated herself about essential tremor and began trying different treatment options. “I started taking Propranolol. It did okay, but not great.”

There is no tailored treatment for essential tremor. The medications used to treat ET are actually designed to treat other conditions, but over the years physicians have found that these medications help to reduce tremor symptoms. These commonly prescribed treatment options didn’t work for Jean, so she decided to investigate alternative therapies to see if anything else would help control her tremor.

Jean is inquisitive by nature, so seeking out new and different options is nothing new to her. “I tried acupuncture. I thought it would be the answer but it didn’t make the tremor go away”. The treatments were very expensive and without any real results she stopped going. “So then I started seeing a chiropractor. After 6 weeks the chiropractor told me (he was so sweet and honest) that he didn’t feel it was making any difference in my tremor.” So again she stopped going. To this day she is reading and researching, looking for new options and noting what does and doesn’t work for her.

In 2001, Jean (and her tremor) was thrown into the public eye when her first book, Growing Up Harley Davidson—Memoirs of a Motorcycle Dynasty, was published. She had spent a number of years gathering personal family stories and old photographs to bring readers a rare look into one of the most famous families in motorcycling history. Overnight it seemed the spotlight was on her. But instead of speaking to a classroom full of eager students, she was speaking to groups of two, three and four hundred hardcore, leather-clad motorcycle devotees at a time. Not to mention the television interviews!

Stress and anxiety can exacerbate essential tremor and Jean faced some difficult moments in front of the camera. When asked how she managed all the attention and added stress, her answer was as simple and sweet as her personality, “I try to make them laugh.” Her gentle nature and down-home style, which are as visible as her tremor, are huge assets. “When I am speaking to a group or in an interview, I tell them right at the beginning,” she explains, “I have essential tremor.” She would then go on to explain she got her tremor from her mother, joking that her mother loved her so much that she wanted to leave her something she would never forget. “It always makes people more comfortable when they know what it is and why I shake.” It also makes Jean more comfortable knowing that her audience isn’t judging her or making assumptions about her shaking.

But Jean’s life was not to continue on with only laughter. Sometimes life also brings sorrow.
In 2006 a tragic accident took the life of her grandson, Ryder. If you’ve ever been around little boys, you know that 4-year-olds don’t always follow the rules. Ryder and another four year old friend from the neighborhood were playing near the edge of a water-filled ditch; a place they knew they were not supposed to be near. In a moment, they both fell into the water. An older boy watched in horror, frozen with fear. As soon as Ryder’s father realized what was happening, he jumped in the water searching desperately for the two boys. He was only able to save the other child. Ryder was lost. When Jean received the news, she recalled, “I don’t remember ever shaking so badly.”

The family was devastated, as any family would be at the loss of someone so young and so precious. The tragedy, however, sparked something in Jean. It was time to reinvent herself again. She had already written books about her famous family. She had even written a few children’s books, with titles like My Daddy Makes the Best Motorcycle in the Whole Wide World. But after this loss, Jean knew it was time to go back to her true love, education. She would find a way to turn this terrible loss into a tool that could save the lives of countless other children.

Using her background as an educator coupled with business savvy and an entrepreneurial spirit, she established her own non-profit organization to help children understand what to do in crisis situations. Called “Yell and Tell,” Jean’s program teaches young children what to do when they observe a dangerous situation. Children often become confused in difficult, high stress situations because they fear getting in trouble or being seen as a tattletale if they ask for help. Jean’s program teaches children how to take action when there is trouble or danger—and not just the dangers of water. Her “Yell and Tell” program also addresses topics such as what to do about bullies, what should happen if there is fire, and how to react around dangerous weapons, just to name a few.

The program is doing exactly as Jean had hoped. Her website, www.yellandtell.com, has numerous stories of little “Yell and Tell” heroes; children who have saved lives, who knew exactly the right thing to do. They used their voices to yell, tell, and get help. Their stories are a beautiful tribute to Ryder.

Living with essential tremor can present many challenges, many speed bumps in the road. But Jean’s example of taking on challenges—whether it’s overcoming the fear of public speaking, getting a diagnosis you are not sure you want to hear, or turning a personal tragedy into a life-saving tool for children—is a testament to her passion for living life to its fullest.

“Life is so much bigger than having a tremor,” she says. “I say it over and over again…Find your gift. That’s what people have to do; they need to find their gift. Find it and develop it. And then, give it back to the world.”

And that is exactly what Jean has spent her life doing, just like her father and his father before him.

Jean may not be a machinist, bike designer, or motorcycle racer, but she is definitely a shining star in the Harley-Davidson family. And there doesn’t seem to be anything that can hold her back, especially not ET.