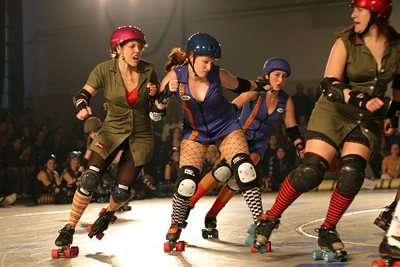 Stereotypes shape the way we think about people and situations. People with ET are often stereotyped as being nervous, withdrawn, anxious and elderly. But Jessica Obrist, 28, of Seattle, is proof positive that stereotypes are made to be refuted.

As an advertising professional, actress, and roller derby athlete, Jessica has learned to succeed in a big way despite her tremor. It’s hard to believe she ever questioned her ability to succeed, but it was indeed a serious issue.

“I always thought I had something wrong with me that I couldn’t fix. Something that actually prevented me from being confident when being confident is my nature,” says Jessica.

While acting in high school, Jessica assumed she had extreme stage fright even though she felt confident and happy. “I had a hard time keeping my hands from shaking violently when holding props on stage or for class presentations. I tried to hide it, but it would tend to get worse when I did.”

In an attempt to work around her stage fright, Jessica took up puppetry. “I guess it’s sort of funny now to think I tried puppetry to overcome nervousness and shaky hands,” Jessica recalls. “I remember working on a commercial, and I was so excited because it felt professional, but my hands just couldn’t hold still.”

After earning a degree in journalism from the University of Oregon, Jessica began working at a Seattle advertising agency. She decided it was time to find out exactly why her hands were shaking after her boss told her she had nothing to be nervous about – and she wasn’t nervous.

Seeing a neurologist 2-1/2 years ago, Jessica was given a diagnosis of ET and was offered treatment options that she declined. “I really didn’t feel it was important at the time. I was just glad to have an explanation. Leaving his office, I didn’t know exactly what essential tremor was, but I felt like I at least had a start,” explains Jessica.

In summer 2005, Jessica read a story about a group of Seattle women who were organizing the Rat City Roller girls, a roller derby league. She decided to volunteer and ended up becoming a member of a team.

“I honestly had no intention of ever trying out. I just didn’t think I was capable, not because of my tremor but because I was so out of shape,” explains Jessica. “But when tryouts came several months later, I thought, ‘Why not?'”

Jessica took the stage name of Jo Jo Stiletto and became a member of the Sockit Wenches, one of four all-female teams in Seattle. But when she laced up her skates and began derby, Jessica got a shock. She learned she had tremor in her legs.

“The hands are obvious and the tremor can get really bad,” says Jessica. “But the legs were not so obvious until I strapped four wheels to each foot and tried to knock people over.”

Jessica began taking Propranolol before practices, games, and performances. It wasn’t an easy transition for her to take the medication as needed.

“At first, I didn’t like the medication because I didn’t feel like myself, sort of like I wanted to sit in a corner and be calm. That’s sort of the antithesis, or opposite, of the roller derby,” explains Jessica. “But I worked through that after a few months.”

According to Jessica, good personal habits are also effective in combating ET. “I try to rest, not drink coffee, and keep my stress level to a minimum,” she explains. While waiting to adjust to the Propranolol, Jessica sat out a few games, but this turned out to be an opportunity in disguise.

“It’s a great story,” says Jessica. She met her boyfriend Eric at the roller derby. During a game, Eric had asked a mutual friend why Jo Jo was so shaky. When he learned she had tremor, Eric researched ET on the Internet. “Before even really knowing me, he put in more effort to understand ET than anyone I have ever met,” says Jessica. “And he ended up paying for my IETF membership as a Christmas gift!”

Through the IETF, Jessica has found that she is not alone with ET. “I think there must be a lot of denial with ET. When I walked away from the neurologist appointment, I didn’t know anything. I actually thought maybe the doctor was making it up to make me feel better,” Jessica explains. “The IETF has been important in letting me know that ET is real and that other people have it.”

Now, Jessica shares that knowledge. A recent Rat City Rollergirls newsletter story about her included a link to the IETF website.

“I actually have fans who have tremor,” says Jessica.

And Jessica is an excellent role model for those fans when it comes to debunking stereotypes about ET. “My ability to succeed on stage or on skates is not going to be stopped because of ET. I might have to work a little harder or fall a little more often than my teammates, but I can still do it.”