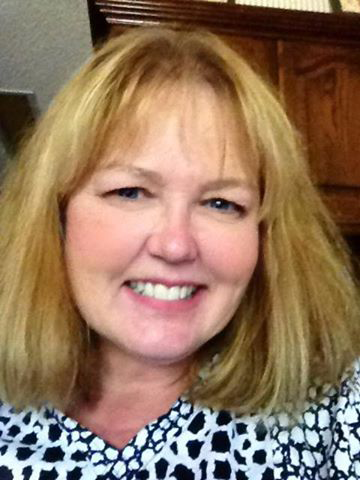 There was no one bustling around the kitchen, cleaning up after breakfast; no one watching television, catching up with the latest celebrities as they make the morning show circuit; no one primping or preening in the bathroom, preparing for a make-or-break meeting. No. All was quiet … except for that telephone.

The call was from a member of the IETF staff, calling to speak to Joyce Urban, Oklahoma native and resident bee keeper, about her essential tremor. But Joyce was quite occupied at the appointed time of the call. See, Joyce had a young chicken that had become lame and she was out in the yard trying to coax it into walking. Upon hearing the phone, Joyce left the chicken as it gingerly limped across the yard, now interested in a plump and juicy worm who had made the mistake of surfacing nearby.

Being sure to carefully step over the three napping dogs who were basking in the morning sun, she made her way into the house. Of course, just before she reached the phone, it stopped. Hands shaking she reached for her stack of emails that had the return number, when out of the corner of her eye she saw movement. Looking closely at the jars on the table, she watched as a newly hatched swallowtail butterfly emerged from its cocoon, gently drying its wings in the morning sun.

Slowly she reached into the jar to retrieve the delicate creature. But her shaking hand disturbed it. The butterfly flew past her trembling hand and made for the nearest spot of sun. All the commotion got the dogs’ attention and each took turns trying to sniff the poor little thing. Joyce pushed her way in front of the curious canines and was able to shoo the butterfly out the door and into the garden, where it was promptly chased by the gimpy chicken and all its multitude of brothers and sisters. Frazzled but focused, Joyce managed to move the swallowtail into the safety of a nearby apple tree, out of reach from the hungry chickens.

Welcome to life on the farm.

“Like my parents, I always had little side projects that brought in a little extra money.” In this case, Joyce’s special side project started with a simple vegetable garden. She had started the garden in order to provide her family with fresh veggies, free of pesticides. She wanted her sons to grow up appreciating the land and its bounty, to understand the natural world and their place within it. However, although she had plenty of fertile land and her mother’s green thumb, what she didn’t have were pollinators. 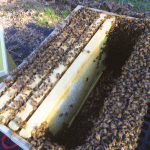 Bees, butterflies, and other insects play a critical role in the pollination of fruits and vegetables and in maintaining a diverse and healthy ecosystem. Joyce researched and learned all she could about pollination, reading everything from bee keeper blogs to the Central Oklahoma Beekeepers Association articles. “I needed bees for my garden to grow. So I learned all I could.” Joyce said. “I had some 40-year-old birch wood lying around from a previous remodeling project and decided to make a hive out of it.” She had never seen a wild bee hive before and had no idea if the wild insects would find her hive inviting enough to make it their home. By April, swarm season, the hive was ready and like clock-work the wild bees showed up and took it over. And that was the start.

With her happy and healthy bees pollinating her garden and producing plenty of honey, she spent her days as an office manager in a busy dental office and spent her nights making honey-based products like homemade soaps and lip balm. “Some nights, especially around the holidays, I would be up until the wee hours of the morning making and packaging gifts for friends and co-workers,” she said. “Then I would sleep a few hours and get up and go to work.” The office where she worked had become more and more stressful. The dentist was very well-liked and his patient list kept growing and growing. And so did the paperwork. It began to weigh on Joyce. “I got to the point where I just couldn’t keep up any longer. It broke my heart, but after 30 years it was time for a change.”

That’s when she decided to make what was a fun little side-job a full-time career. From one hive to seven, Joyce is continuing to this day to build her farm. “People wonder how I can be a beekeeper with essential tremor. And I tell them it is the same as with anything else, you just do it.” Of course she has to stop and think a little more than other people, take into account how she is feeling and add in some additional precautions just to be safe. But her determination and perseverance set her apart and allowed her to continue on when others may have given up. “I decided to create an entire ecosystem in my backyard, like my grandfather and mother used to have. I knew it wouldn’t be easy, but what in life is?”

It definitely hasn’t been easy. She has to do things differently than other keepers to try and minimize the impact of her tremor. She has some special holders that help her grip the frames within the hive more securely. And she never picks up the frames with her fingertips or the tray full of golden deliciousness would quickly become a sweet treat fit only for the dogs. “Of course, I suit up every time I work with the bees and make sure I have a firm grip on the frames using my whole hand,” Joyce said. “And I carry allergy medication, just in case I do get stung. But if I take my time and don’t get too excited, the bees don’t seem to mind my shaking.”

“I also have to be extra careful when I make my soaps,” Joyce explained. Joyce’s soaps contain lye, a caustic solution containing largely potassium carbonate or potash. As is common with other corrosives, the major safety concern with lye is its potentially destructive effects on living tissues such as skin, muscle, and the eyes. Lye can easily cause chemical burns, permanent injuries, scarring, and blindness, immediately upon contact. “I was so nervous the first time I made homemade soap. I was so afraid I would shake it all over the kitchen or worse yet, all over myself.” But as with most things, Joyce did her homework. She learned all she could, took all the right precautions, and used her best judgment to decide when her tremor would allow her to go through the process safely.

Joyce has a wonderful line of soaps that look almost good enough to eat. With luscious combinations like star anise and lavender, and lemon verbena, there’s something for everyone. You can visit the Joyce’s Urban Bee & Soap Company online at www.urbanbeeandsoapco.com to see her whole line of products. Just don’t expect the labels to be on straight.

Since leaving her office job, Joyce has built up her line of homemade products to include all-natural beeswax candles, skin salves, laundry soaps, and more. She sells her wares at local farmers’ markets, to friends and neighbors. “Not too long ago I met a man at the local farmers’ market,” Joyce recalled. “His hands shook pretty bad and when I asked him about it, he said he didn’t know why they shook, just that they always had.” Joyce saw this as an opportunity to help educate the man about essential tremor, and recommended he make an appointment with a local movement disorders neurologist for an appropriate diagnosis.

It took Joyce a long time to get an official diagnosis of ET too, although she has had it since childhood. “Thanks to the information I found on the IETF’s website and the support I get from their Essential Tremor Awareness Group on Facebook,” Joyce commented, “I can educate others about essential tremor.” Understanding her condition not only allows her to explain to her customers why her product labels are always crooked but also helps her understand what activities and stressors make her tremor worse.

“I know the day will come when I may not be able to do some of the things I am able to do today,” Joyce said, “and frankly, it’s just not fair. But I know I have to keep going. For as long as I can. Just like my bees, I have to keep moving along, moving forward. I just have to.”