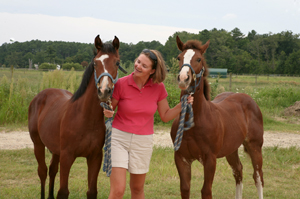 Stopping at Dunkin Donuts® was a bonding ritual for 16-year-old Kate Larsen and her sister every morning as Kate drove the pair to school. She always ordered a large coffee. It’s a common ritual repeated early in the morning by high school and college students everywhere. And like many people of her generation, Kate also liked to drink “energy” drinks that serve up heavy doses of caffeine.

One day someone asked Kate if she was drinking too much caffeine. Perplexed, Kate wanted to know why the person would ask such a thing. The answer: Kate’s head was shaking.

Kate, now 27, realized her head was moving back and forth as if she were disagreeing with something or saying “no.” Like her questioner, Kate determined her problem was too much caffeine. Even though she loves caffeine, she immediately curtailed the energy drinks. Giving up her morning coffee ritual with her sister was much more difficult.

In college, Katie’s head shaking became worse, but she didn’t allow it to trouble her too much. She had another, more obvious problem.

When she became nervous or stressed, her face turned bright red. “I blushed really badly. It was terrible and much more embarrassing than my head shaking,” says Kate. “Besides, the doctors I saw never noticed my head shaking, and when I pointed it out, they just told me to stop drinking caffeine, even after I told them I didn’t drink caffeine anymore.”

Kate”s head tremor became a serious concern one night when she was pulled over in Hackettstown, NJ, for speeding.

“The officer asked if I was okay. I said I was fine. He asked again, and then he said, ‘Miss, you’re shaking.’ Need I say I was worried? I was attending Centenary College in Hackettstown, NJ, and college towns are known for partying. I tried so hard to hold myself still, but that just made it worse. He asked one more time and then, thankfully, just gave me a speeding ticket.”

At the time, Kate was taking Wellbutrin®, an anti-depressant. She thought the medication was making her tremor worse, so with her doctor’s approval, she quit taking it. Again, eliminating a possible cause made her tremor a little less noticeable, but it didn’t go away completely.

After college with a degree in equine studies and communication, Kate moved from her childhood home in Connecticut to Virginia for a job and a boyfriend. Equine studies, she explains, is the study of horse anatomy, physiology, and everything else there is to know about horses. She studied communication because she thought it would be wonderful to write for a non-profit, especially a non-profit that benefits horses.

“I’ve been in love with horses ever since I was little. My parents dropped me off at a friend’s horse barn after school or on the weekends so I could work off riding lessons or just be with the horses,” she explains. Kate explains why she loves horses. “They’re caring. And they’re dangerous. You get bit, kicked, stepped on, fallen on, and bucked off. As a kid, I didn’t mind getting bucked off. Now I don’t want any part of that or messing with a horse I know is trouble. I have a passion for horses, and I love kids. I love working with horses and kids, and introducing kids to horses.” 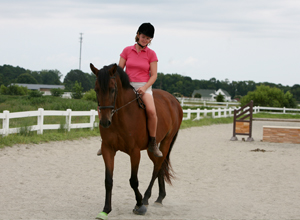 Two years after graduating from college, Kate saw a neurologist about her head tremor. After talking with Kate, observing her tremor, and hearing about a possible family history—Kate’s aunt had a hand tremor but told everyone it was a side effect of diabetic medications—the physician diagnosed Kate as having ET.

“I couldn’t take it anymore. I was going to pull out my hair. So, I was relieved when he saw I had a problem. He saw I was shaking,” says Kate.

The neurologist put Kate on Mysoline®, but that made her sick and her tremor didn’t improve. The neurologist then sent Kate for a deep-brain stimulation (DBS) surgery consult, but the neurosurgeon suggested she try other medications before seriously thinking about surgery. He prescribed Topamax® and propranolol. Kate was relieved when her tremor improved.

When Kate had outpatient surgery in early 2007, the nurse couldn’t detect her blood pressure because propranolol had lowered it so much. Kate decided to go off all medication. Today, she still limits her caffeine intake, exercises, and deals with the reactions of others to her head tremor.

“I hate it,” she says. “Some people think I’m cold, shivering even when it’s hot outside. Others think I’m saying ‘no.’ Others shake their heads back at me. I guess they think they’re funny. Sometimes when the shaking is really bad, or I think it will be a very stressful day, I protect myself by holding my head with my hand.”

But Kate takes the reactions she gets from her riding students as opportunities to teach people about ET. “I’m open to my clients about my shaking. I tell them – the ones that notice or ask – that I’m not cold and I have ET. I explain to them that it’s not fatal, but it at this point it’s not curable. I also tell people what makes it worse and how I deal with it.”

Although Kate has never allowed ET to hold her back from pursuing her dreams, she has chosen to eliminate some things and replace others when stress levels become too great. For Kate, it isn’t about how ET limits her; it’s about what she can accomplish despite ET.

“ET has affected my work, but I see it as a good thing. I quit a very stressful job in the horse industry that just pulled me from every angle. I felt myself stress more, so in turn my shaking got worse. I felt there was only one thing to do – get rid of the stress.”

“Kate knows what she wants, and she has a wonderful ability to relate well to other people,” says Peter. “She is a real role model for young people, for people of any age really, on directing one’s life while dealing with the effects of a chronic condition.”

As Peter says, Kate doesn’t hold back. Although she is working as a horse trainer and riding instructor, Kate is considering returning to school to become a nurse. She is also contemplating starting an ET support group. Kate’s can-do attitude is something she encourages people with ET to adopt.

“I want readers to understand that even though they have ET, they can experience their lives without holding back. Don’t let ET restrict you.”