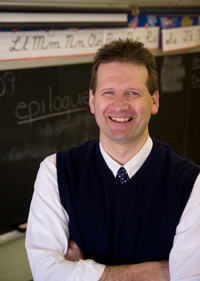 Rich Grieb, 44, was in his early 30s when his right hand began to shake. The tremor was so subtle when pouring water from a pitcher, writing or doing something that required fine motor skills, so he only gave it casual notice. In fact, Rich says he dealt with it by ignoring it because he was afraid that he had Parkinson’s disease.

Lisa Jo, Rich’s college sweet heart and wife of more than twenty years, was also afraid that he had Parkinson’s disease, but she chose to cope with the situation differently. “I don’t do denial,” Lisa Jo says.

Lisa Jo went into action and began researching causes of tremor on the Internet, but Rich was not yet ready to hear about what she had learned.

One night, the couple was eating at a restaurant when Rich’s tremor became so bad that Lisa Jo had to cut his food. This shocked Rich and instantly brought him out of denial.

“It was extremely frightening. I realized that I was beginning to lose my independence, my way of life, possibly my employment and the activities I enjoy,” says Rich.

At Lisa Jo’s suggestion, Rich visited the family doctor, who referred him to a neurologist at Johns Hopkins Medical Center in Baltimore. In a short time, Rich was diagnosed with ET. However, according to Rich, as welcome as a diagnosis was, this was just the beginning of a series of frustrating losses caused by ET.

Initially Rich was prescribed propranolol, followed by a number of other beta-blockers, but they provided little help. His tremor began to worsen. While searching the Internet, Lisa Jo came across an article about Deep Brain Stimulation (DBS) surgery for ET. After further investigating the procedure, Rich and Lisa Jo began searching for a neurosurgeon.

During this time, Rich began his first year as a school principal, but the timing of the promotion was off because of the compounded stress of dealing with worsening tremor, planning for brain surgery and adjusting to the challenges of a first year principal. Rich decided to return to teaching special education classes in his central Pennsylvania community.

In August, 2000 Rich had DBS surgery. DBS improved Rich’s tremor a great deal. However, it did not eliminate it, and eventually the tremor began to worsen. To cope, he taught himself to use his left-hand, but just as he was becoming proficient in its use, it began to shake also.

Ever since childhood, Rich had been an avid bass fisherman, and eventually joined a local fishing club. The club soon became an East Coast competitive circuit, and at one point he was ranked among the top twelve bass fishermen in Pennsylvania. According to Rich, he found himself considering the possibility of turning professional, but with both hands affected by ET, it just wasn’t meant to be.

“What began as an aspiration became a hobby, and eventually it became nothing but a struggle,” says Rich. Because Rich’s tremor worsened in both hands, he returned for two additional DBS surgeries and one gamma knife surgery. After each surgery, Rich experienced relief from tremor, but eventually shaking in both of the hands worsened to the point of interfering with his ability to perform activities of daily life.

Life with ET, according to Rich, has been like “riding a mental roller coaster. ET has driven what I can and cannot do. I shy away from things now, and always have to think ahead when going out into social situations.”

But even with the trials of life with ET, Rich has reached a level of acceptance that life will never be quite the same again. “I’ve come to accept that at some point in my life I might not be employed, or I might become so limited that I am no longer independent,” says Rich.

He has even reached a point where he can see that ET has presented him with opportunities for personal growth and for positively affecting the lives of others. According to Rich, having ET has helped him empathize with his special education students more and appreciate the challenges that they face in their lives.

“As my hardship grew,” says Rich, “I came to realize that even though I am the teacher, my students were the ones who were teaching me. I guess it has made me a better person.”

When speaking to Rich and Lisa Jo, one gets a sense that they are a team in every sense of the word; they share a teaching discipline, a home and the struggle for independence. But Rich and Lisa Jo are not alone in facing the challenges of ET. They have friends who are emotionally as well as physically close. One family they are close with is the family of Chicago Bears’ placekicker Robbie Gould.

As Rich tells it, he first met Robbie during the first week of Robbie’s sophomore year of high school, a time when many upperclassmen make freshmen the object of pranks and jokes.

“One day, when I was teaching in my classroom, I heard a commotion outside in the hallway,” says Rich. “I went to check it out, and Robbie was out there trying to help this freshman instead of giving him a hard time.”

After Rich’s last surgery, Robbie called and told him he wanted to start an ET foundation in honor of him because he was so touched by witnessing Rich’s struggles with ET and the manner in which he dealt with them.

“It was a tearful call, but it gave me hope,” recalls Rich, “but that’s him. He cares about people. He’d give someone the shirt off of his back and not think anything about it. That’s how his entire family is.”

In the fall of 2008, Robbie’s Goulden Touch Foundation raised $50,000 for ET research during its first fundraiser at the Hard Rock Hotel on Michigan Avenue in Chicago. In attendance were several of Robbie’s teammates, his head coach Lovie Smith, Chicago media personalities, IETF members and the guests of honor, Rich and Lisa Jo Grieb. An additional $12,000 was raised at a New Year’s Eve gala at Hub 51 in Chicago.

Robbie Gould’s efforts on his behalf have given Rich a new view in which to place ET within the context of his life. “Some people have a purpose in life. My purpose might be to support others living with ET. I want to reach out and help as many people as possible,” says Rich. “With the efforts of someone like Robbie Gould, along with the IETF, I realize that I’ve been going down a path, and I can make that path less strenuous for others if I can help give them hope and let them know that they are not alone.

“People with ET live challenging lives,” says Rich. “When you lose your independence, it is tough, but no one is alone in their struggles unless they choose to be so.”