Only Knowing Life with Essential Tremor 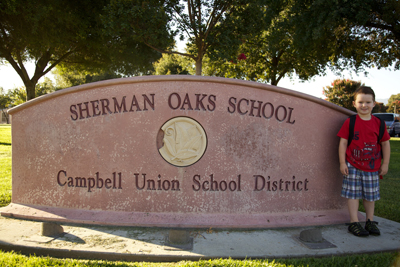 Ryan Brown’s school, Sherman Oaks, held a walk-a-thon on May 26, 2011. The school was raising money for the American Cancer Society for the third year in a row. “As important a health concern as cancer is, Ryan didn’t have a personal connection to it,” says his mother Angela. “So together we decided to raise money for something important to him: essential tremor.”

Ryan was diagnosed with essential tremor (ET) right after his fourth birthday. He began having tremor in his right hand at the age of two. Now 7-years-old, Ryan asked his friends and relatives to donate to IETF to support him in this year’s walk-a-thon. He did a total of 14 laps and raised a total of $225.

Angela and her husband Eric felt mixed emotions in response to the news of their son’s ET diagnosis. “Having a diagnosis and learning his condition had different treatment options brought a sense of relief,” says Brown. “The reality of our child living his life with ET also brought about feelings of grief, fear, and uncertainty about what his future would be like.”

Ryan’s parents kept their conversations private so he wouldn’t overhear and begin feeling what they did. “We didn’t want him to have our emotions attached to ET,” says Brown. To be honest, we still have a bit of anxiety and fear about how Ryan’s condition will progress and how it will affect his life. It’s something we can’t control.” 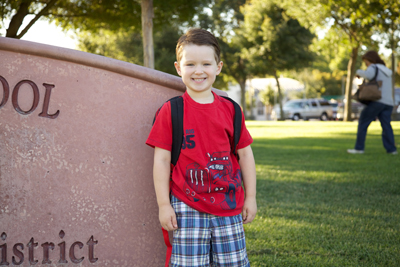 Having information, meeting others with ET, and knowing Ryan’s receiving wonderful medical care has helped both Ryan and his parents. They chose to be honest and open about Ryan having ET with friends, relatives, and school. The knowledge made the family’s acceptance easier. “It’s not something we hide or are ashamed of,” says Brown.

Ryan’s pediatric neurologist requested occupational therapy as treatment. As a result, he saw an OT hand specialist once a month for nine sessions. Brown says “she worked with him on strengthening his neck and arm muscles. She asked us to sign him up for swimming lessons to work on his neck and arm alignment and strength.”

When Ryan went to kindergarten, his parents requested a meeting with the principal and his teachers. They met with the school staff during the first week of school, shared information with them on ET, and drafted a 504 plan. This plan is similar to an individualized education plan. Named after the civil rights law Section 504 that prohibits discrimination against individuals with disabilities, a 504 plan ensures that the child with a disability has equal access to an education.

“At school and at home he uses a slanted desk when writing to keep his neck straighter and steady his hand,” says Brown. “He also uses straws on a regular basis and thick pencils. He takes breaks when his hands hurt from writing to rest.”

During his kindergarten year, tremor also began in Ryan’s left hand. Although he now has tremor on both sides of his body, he does not yet use medication to control his tremor. Faced with a neurological condition that affects 10 million Americans, often much older, this young boy maintains a positive spirit and the life of an active youth. “Ryan only knows life with tremor,” says his mother. “He is athletic and enjoys music, art, and reading.”

His father Eric is believed to be the genetic carrier, though he has no symptoms yet. Eric’s mother has developed mild tremor in her hands in recent years. Ryan’s younger siblings, 3-year-old Garrett and 11-month-old Drew do not have tremor.

The family became members of the IETF after Ryan was diagnosed in 2009 with ET. “We are truly thankful for the resources and education we have received through the organization,” says Brown. “I attended an information meeting sponsored by IETF a year ago in the Bay area and was awed to be in the presence of so many others affected by ET.”