Some people know from a very young age what they want to be when they grow up, which way they want their lives to go, and how they want to get there …

Steve Moore was not one of those people.

He was not a child prodigy, nor a particularly good student, for that matter. He was your typical kid, who instead of figuring out how to reduce fractions in math class was busy doodling away in the margins of his textbook.

But deep inside, Steve had an undiscovered gift — a creative brilliance and clever wit hid just below the surface, waiting for the right inspiration. 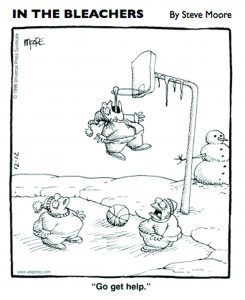 You might recognize Steve better as the news editor at the Los Angeles Times, where he was member of the “breaking news team” that earned a Pulitzer Prize in 1992 for their coverage of the Rodney King Riots and in 1994 with their reporting on the Northridge earthquake. Or you might know him as the writer and producer of the animated films Open Season (Sony Pictures Animation) and Alpha & Omega (Lions Gate Films). Or possibly you saw his work on TV, in the mishap adventures of the medieval Metalheads (TV Loonland/BBC), or in print with his King of the Bench (HarperCollins) series of books for middle-schoolers. But, by far, he is best known for his comic In the Bleachers, a sports-related cartoon which is syndicated in more than 200 newspapers worldwide.

The IETF spoke with Steve at his home, in Boise, ID, to talk about his work, his life, and his essential tremor:

I showed a warning sign of heading down that path in grade school when I would draw cartoons in the margins of my textbook during math class. But it wasn’t because I wanted to be a cartoonist; I just needed to keep my brain occupied while I flunked math.

I wanted to be a veterinarian, so I went to Oregon State University (OSU) and majored in pre-veterinary medicine. But I had a lot of fun in college, and my grades showed it. I didn’t flunk out, but my grades dipped so low that I had to punt the veterinarian dream and change my major to journalism, which did not require organic chemistry and embryology. 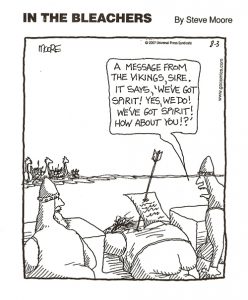 What sparked your interest in cartooning and animation?
In my junior year at OSU, a roommate let me borrow two books: Whack Your Porcupine and Never Eat Anything Bigger Than Your Head. They were collections of cartoons by B. Kliban. Kliban was the spark that got me started fooling around with cartoons. After graduation, I was sports editor at The Maui News when I first caught a glimpse of The Far Side by Gary Larson. I was inspired by Larson’s loose style, so I decided to draw a sports cartoon with a Kliban/Larson spin and – as an afterthought – submitted it for syndication. In the Bleachers launched in 1985 in about 30 newspapers and is still going strong today, more than 30 years later.

Where do your ideas come from?
Anything can spark an idea. I came up with the idea for Alpha & Omega after reading an article about the reintroduction of wolves back into the Idaho ecosystem. The story illustrated the tracking of one wolf’s movements across the countryside via a radio collar. The wolf kept heading north, would turn around and go south and then come back, head north and turn around again, over and over. As I was watching the animal moving across the landscape, I figured the wolf was trying to get back to Canada, where it was originally captured. Then I wondered what would happen if biologists messed up and instead of releasing a mated pair of wolves, they release two wolves who hated each other. Like the flip side of the old movie African Queen: instead of two humans who hate each other trying to get through the jungle back to civilization, this was two wolves who hated each other trying to get through civilization back to the wilderness.

With Open Season, my partner, John Carls, and I had the concept: Animals turn the tables on hunters, but we needed a story. So I thought about animals who live within and on the outskirts of mountain towns. Inevitably these animals would begin to cause problems for the local human population and park rangers would be forced to relocate them back into the wild. But what if they were dumped into the wilderness three days before hunting season? John and I pitched the idea to Sony Pictures Animation, and the story of Boog, a 900lb. domesticated Grizzly bear, and his fast-talking mule deer friend, Elliot, was given the green light.

When were you diagnosed with essential tremor?
I first noticed the tremor in my hands when I was about 35. It seemed to come out of nowhere. But I knew what it was since both my mother and sister also were affected by ET.  I feel I have been able to control it pretty well, until recently. I have noticed, as I age, the tremor seems to be getting worse, and it is becoming more and more difficult to draw. 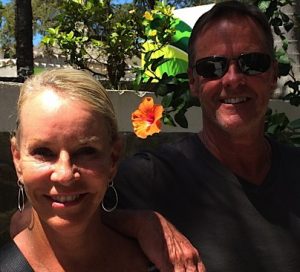 So ET does run in your family?
Yes. It came to my sister and me from our mother and father. My dad died of cancer at the age of 46, and I remember how difficult it was for my mother to manage her tremor without him. She was very embarrassed by it especially in certain public situations, like eating in restaurants. But she was always honest with us kids about it. She warned both my sister Debi and I that we might develop it was well. Debi’s tremor started when she was in high school and it affects her hands, arms and head.

Debi is our ET “lab rat”. She does all the research on the condition. She was the first to try Propranolol (Inderal®), a common medication used to treat ET. She even underwent stem cell replacement, which she hoped would help. It didn’t. But that hasn’t stopped her. We have both recently signed up for a study being conducted by Yale/Columbia University to identify the genes responsible for ET (See FASET study, page 13).

How does ET affect you?
Physically, it’s in my hands. I take propranolol but it doesn’t calm the tremor enough to allow me to draw. Well, I shouldn’t say that … I can draw, but the lines are really gnarly looking. Having an alcoholic drink or two helps too, but it’s not something I want to continue doing every day. I draw six days a week and I’m worried about the cumulative effect of that on my body.

Publicly, it doesn’t really bother me. For me, having ET is normal. I am really up front about my condition. I often find that if I tell people about it beforehand, like when I’m doing a book-signing or some public speaking event, it makes it so much easier. It is one of the many coping techniques I use. Being up front and honest is key.

Emotionally, I know this condition will have life-changing consequences for me. At some point, fairly soon, I will be forced to stop drawing. I’m not sure what I’ll do then.

What are your hopes for the future?
I hope researchers discover a cure or an effective treatment for ET in the near future. It’s not a deadly condition, but it is life-changing. I am a strong supporter of research.

I also hope to help raise awareness. I am currently working on a couple of books, and once they’re done I’ll start the book promotion. These tours are a great platform for bringing some much needed attention to essential tremor. I am not afraid or embarrassed
to talk about ET and I want to do my part to help
raise awareness.

You don’t have to be one of Hollywood’s A-list stars to support essential tremor awareness initiatives or research efforts. You just have to have a passion for the IETF mission and a story to tell. Together, if we all do our part, greater awareness, better treatment options, and a cure are possible.