Wrapping Your Mind Around Head Tremor 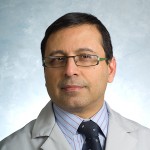 Arif Dalvi is the Director of Comprehensive Movement Disorders Program at Palm Beach Neuroscience Institute in West Palm Beach, FL, and member of the IETF’s Medical Advisory Board.

The term “tremor” refers to an involuntary shaking of any part of the body. While tremor in the hands is most common, head tremor can also occur. In patients with essential tremor, head tremor can be an isolated symptom or may occur in combination with hand tremor. Essential tremor is by far the most common cause of head tremor. Another cause is cervical dystonia, also known as spasmodic torticollis. Head tremor may also occur in patients with Parkinson’s disease. Stroke, head injury, and multiple sclerosis are other causes of tremor but are less likely to cause head tremor.

Hyperexcitability and rhythmic activity in the circuits of the brain are believed to be the underlying mechanism for tremor. One such circuit includes three areas deep in the brain called the red nucleus, the inferior olivary nucleus (ION), and the dentate nucleus. This circuit is responsible for fine-tuning voluntary movements. Proper function prevents any undershoot or overshoot of movements. An abnormal response in this circuit, especially within the ION, can lead to tremor.

Patients with cervical dystonia may employ sensory tricks to reduce the severity of the tremor. Touching the cheek or chin (a geste antagoniste) is a commonly employed sensory trick. Head tremor with cervical dystonia has a directional component and is usually worse when looking in one direction and reduced when looking in the opposite direction. It may be possible when examining the individual to find a head position where the tremor almost disappears. This position is referred to as a “null point”. 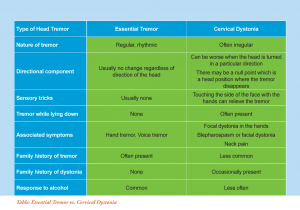 In clinical practice, distinguishing head tremor from essential tremor versus that from cervical dystonia can often present a challenge. Making this distinction is important as the treatment for these conditions can be quite different. The table to the right identifies some features that can help in making this distinction. (Click the image for a larger view.)

The diagnosis of tremor remains a clinical diagnosis. An MRI or CT scan of the brain is usually ordered to rule out structural lesions such as stroke, multiple sclerosis or a midbrain tumor. In patients where there is a question of whether the problem is essential tremor or parkinsonism, a DaTscan may be ordered. This scan is targeted towards the dopamine transporter (DaT) in the brain which is deficient in parkinsonism but normal in essential tremor. Blood tests to rule out hyperthyroidism and, in younger patients, screening tests for Wilson’s disease may also be considered.

The treatment of tremor is guided by the underlying cause. Propranolol and primidone are the mainstay of treatment for essential tremor. Other medication options that are helpful include gabapentin and topiramate. Cervical dystonia may respond to treatment with benzodiazepines. Clonazepam, which is a long-acting benzodiazepine, may be preferred in comparison to shorter acting drugs such as alprazolam or lorazepam. Baclofen can reduce dystonia by acting on GABAB receptors. Tizanidine is an alternative to baclofen. However, since tizanidine can cause liver damage (in rare cases), monitoring of liver enzymes for the first six months is recommended.

Botulinum toxins can play a role in the treatment of head tremor, particularly in dystonic head tremor. Botulinum toxins block the release of neurotransmitters. This results in decreased transmission of the signal from nerve ending to the muscle, thus reducing the tremor. Repeat injections are required every three to four months.

Deep brain stimulation (DBS) surgery was approved by the FDA in 1997 for the treatment of tremor. However, the target in the brain varies based on the condition being treated. DBS surgery carries an approximately two percent risk of bleeding in the brain, hence it is only offered to patients with advanced tremor that is disabling and not controlled by medications. Head tremor can be more difficult to control than hand tremor and may require DBS surgery to be done on both sides of
the brain.

Non-pharmacological methods to reduce head tremor rarely provide sustained benefit. Physical therapy is generally not useful, however, relaxation techniques can help reduce tremor as anxiety is often an exacerbating factor. There is no specific diet that is helpful but reducing caffeine intake can help
reduce tremor.

Not every person with ET will be affected by head tremor. But if you are, it is important to talk to your physician so you understand what it is and what treatment options are best for you.